It Goes Like This by Miel Moreland: YA Book Review 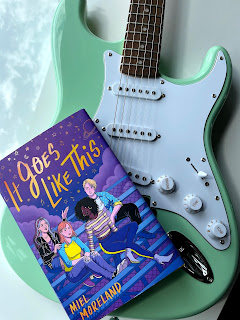 Overview: Moonlight Overthrow took the world by storm as a group of 14 year-olds from Minnesota. Over the years, though, the queer band has evolved and fell apart. Eva's heart was broken by the sudden end of the band (and her first relationship with bandmate Celeste). Steph's mental health was slowly being destroyed by being non-binary yet stuck conforming to the standards of a girlband. Celeste had aspirations of a solo career, and Gina initiated the break-up in favor of an acting career. While Eva has moved on to penning chart topping songs from behind the scenes and going to UCLA, Gina has the acting career she thoughts she wanted, and Celeste is going it alone on a massive world tour. Steph retreated back into their family life in Duluth, shunning LA. But when a storm rocks Duluth, the silent group chat springs to life as the band realizes they needs to help. Can one week heal years of broken emotional bones? Overall: 4.5

Characters: 5 I love the band, and I love that we get to hear from all of the members personally. It's a multi-POV story, but Eva came to be the main character in my head. Maybe it's because I identify with her most, but I'm pretty sure she also got the most time on the page.

Eva is wonderful. Her life was turned upside down and all her plans were destroyed by the band folding, but she's built herself back up. She enjoys having her own identity as a college student while still getting to dip in and out of the industry as a songwriter. I definitely related to Eva on the songwriting and college student-ing front, and I appreciate how she relishes in her small world with a great college friend and a slower lifestyle.

She's also the most invested in fandom. Eva has a secret fan Tumblr, living up to every fandom kid's dream that their favorite artist is secretly watching (and interacting) with them from behind the scenes. I loved watching Eva's journey with fandom (even though she was a member of her own). It follows a path that I see so often of using these online communities for a few months or a year or years to get through a particularly rough time and then eventually realizing that it's helped you so much, you don't need to be there as much anymore. I think it's kinda beautiful. Also, Eva's close online friendship with Kay also just rang super true to my experiences.

Gina was another immediate standout for me. She's living the life as an actress and has successfully pivoted in a way that few in Hollywood do. Gina is hitting another point in her life and career where she feels stuck and unhappy again. She's starting to regret letting Moonlight Overthrow go. Gina has a bit of a romantic subplot with her PA, but most of her story is just about figuring out what to do as a next act- and these days, we'll all have many. It was super relatable, and I think it's a really necessary story. I also love that Gina proves that even if your first impulses to solve a problem aren't exactly right, they tell you important information about what you do need. Gina also gets into the most detail about what happens to teens who get super famous, live a lifetime of experiences, and are barely adults by the end. What do you do after that?

Then there's Steph and Celeste who were a bit more in the background. Steph is dealing with a lot of guilt around being away from their family as a teen. While they've worked to give their family a better life, and they've succeeded, they struggle to detach from the fact that they're not responsible for everything that happens in their mom, grandma, sister, and brother. Steph goes through the important journey of learning that sometimes you have to choose what's in your own best interest.

Celeste is interesting because I feel like Eva is at the center of this story and has more command over how we see Celeste from the start. Eva had her heart broken, so of course, I'm going to default to her side. Celeste's main problem (even though she's at the top of the world touring and having a successful solo career) is that she's still haunted by how much she messed things up with Eva. Celeste is also really bad at realizing that grand gestures and surprises aren't Eva's love language at all (a similar theme to the last YA I read We Can't Keep Meeting Like This), so every attempt to win Eva over in the week they're together falls flat. Celeste has to learn to listen to what she's being told thoroughly before jumping in with her own thoughts, and I think that's an important lesson to learn.

The rest of the characters are pretty minor. Gina has a significant other she briefly mentions, Eva has her college friend Lydia and online friend Kay, Steph has her family members, and Celeste has her assistant Pip, but they all orbit around the edges of the life and conflicts of the band members, so I don't have a ton to say about them.

Plot: 4 The plot is nonlinear, but the main line runs through Moonlight Overthrow reuniting for the benefit concert, rehearsing, and then performing and deciding the new fate of the band. We see little flashes of their life while the band was together and during the aftermath of the break-up as well (so make sure you read the dates at the top of the chapters or you will get very lost). You get to see the most crucial moments from the past in real time as they work to heal those same fissures as adults. I think, at times, these moments could've been smoother. There were times where the plot dragged a bit and I lost that sense of urgency to keep reading. But I did appreciate how all the timelines in the book were realistic to the music industry.

Writing: 5 The book is in multiple points of view, but it's also in third person, which is rare for YA. I struggled with the 3rd person for a lot of the book (which is totally just a personal taste thing). I just felt like I could never get into the characters' heads as thoroughly as I wanted to be. I also didn't really get why we had multiple 3rd person points of view instead of just moving through a 3rd person omniscient. I sometimes forgot who was supposed to be the point of view character of the chapter, and it was hard to find my footing in the story at times.

The book is extremely well researched, and I have to give Miel a huge round of applause for that. As someone who spends all her time on the internet, is well versed in fandom, and is going to school to study the music industry, I usually struggle to set aside what I know about the realities of the industry for what is more convenient for the plot of book. I never had to compromise or suspend disbelief to enjoy the story. There were really cool tidbits thrown in that shed light on what it's really like to be a famous musician that are really accurate and will be exciting for readers. I think IGLT offers a super accurate, behind the curtain experience.

Also, the discussion of fandom was really beautifully done. There are Tumblr posts sprinkled throughout the book, and I absolutely loved them. They're so realistically written (which is SO RARE in YA). I never once had to roll my eyes because the book was blissfully devoid of bad teen impressions. You can tell that Miel knows both her subject and her audience inside and out, and because of that, a beautiful, realistic narrative about online friendship and the power of music to bring people together could shine through.

All Our Worst Ideas Review