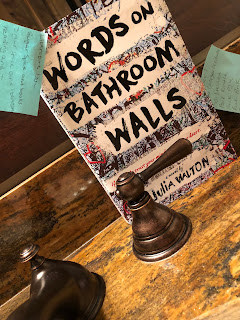 Words On Bathroom Walls by Julia Walton (2017)
Overview Adam is starting Catholic school, not because he's a practicing Catholic. He couldn't go back to his old school after he experienced an episode caused by his schizophrenia in front of the school. Now, on a new trial drug, Adam is taking on a new school and is hopeful that it will be the cure he needs to maintain his normal life. As part of the monitoring of the experimental drug, he must see a therapist who he refuses to communicate verbally with. Instead, he chooses to send in journal entries. These are his entries, recounting his experiences and symptoms. Overall: 4.5

Characters: 5 I loved Adam. We agree about practically everything from the stupidity of the religious school uniform to our thoughts on old people. I did a lot of laughing and shouting "yes!" (albeit, in my head). His parents are also awesome characters. His mother is super dedicated and understanding of Adam's condition. His stepfather took a bit more time to adjust to the reality of Adam's illness, but he turns out to be one of Adam's champions.
The friends he makes at school are also great. Dewitt is there for Adam through thick and thin with tennis and constant chatter. Maya is precise and clinical but opens up for Adam. Though her perception makes Adam scared he will have to share his diagnosis with his girlfriend, she's his perfect match.
Finally, Adam's hallucinations make up a major part of his story. Jason and Rebecca stay in his mind as imaginary friends of sorts, there to encourage him instead of wreak havoc. Then there's the mob boss and Rupert and Basil who provoke and cause outbursts that threaten to ostracize Adam, or, worse land him in the hospital. It is interesting to see the relationships Adam forms with these characters that are ever-present in his mind.

Plot: 5 I appreciated all the avenues this book explored in regard to mental illness. It mentions the Sandy Hook shooting and the stigma towards mental illness that tragedy further facilitated. I thought it was important to show both a mentally ill character and his close minded community digesting it from such different prospectives.

Writing: 5 I thought that Walton did a good job keeping true to the journal format. While there's some detailed dialogue that would never be recounted so precisely in a journal, I get that you need to have some of that to build characters and relationships, but I appreciate that she kept it to a minimum. She really let introspective Adam shine for himself on the page with his unfiltered thoughts about his world.

A Note: The author's note did give me a bit of pause with this book. This is not an own voices story, and the author mentions that there were many liberties taken with his hallucinations, and the story was simply born from the general symptoms of schizophrenia. There was no mention of detailed research or the use of sensitivity readers, which I found strange for a book covering a serious topic from a major publishing house. It's so important to get the representation right with mental health books. While I loved Adam's story and love seeing more books showing schizophrenia, I'm unable to vouch for the authenticity of the rep.


If You Like This Book...
Made You Up: Review Here