YA Book Review: We Were Promised Spotlights by Lindsay Sproul 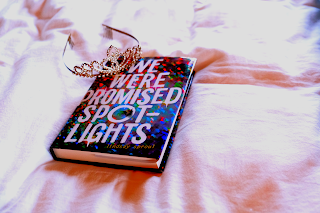 We Were Promised Spotlights by Lindsay Sproul
Overview: Taylor is perfect. She's gorgeous, she's homecoming queen, everyone wants to be or be with her. She can do absolutely no wrong. It's a little infuriating- even for her. And while Taylor might look perfect, there's plenty of mess going on inside. She's dealing with unrequited love, a mysterious, absent father, a mother who doesn't care much for mothering, and a future that is looking bleaker by the minute. The 1999 to 2000 school year marks a lot of changes for Taylor as she sees just how hard she can chuck the social rulebook out the window. Overall: 4

Characters: 4 Taylor is almost the definition of an unlikeable character. That's not a dig or a bad thing at all. She's just so human and misguided that she's sometimes hard to cheer for. She's more than a little jaded. Everyone at school bows down to her. She's super pretty. But she's mean to everyone. When it starts out, she has a ton of internalized homophobia, but instead of confronting it, she's chosen to make her ex-friend, Corvis's, life hell. Because Corvis has something she doesn't. Corvis is out and unashamed of who she is. That feels impossible for Taylor at the start, and instead of challenging why, she just leans harder into being the mean girl everyone wants her to be. Of course, that leaves tons of room for growth, but Taylor isn't a character that is easy to get along with at the start- especially if you've been a victim of bullying yourself. She is interesting, though, and she's far from irredeemable. Her character journey is very satisfying.
Corvis was a character I liked much more, probably because I was able to relate to her. She's uncompromisingly herself in attitude, displaying her sexuality, clothing choices, and in picking friends. She doesn't play by the school rules and gets thoroughly punished for it. But it never seems to phase her on the outside. It frustrates Taylor to no end, despite how much she regrets turning everyone on Corvis. As the book goes on, her character develops quite a bit, and we get to see a ton of fascinating conflict happen in her life.
A lot of the characters in the book represent a small town archetype. They show all the different paths that both keep you there and get you out. Corvis is the smart, promising one. She's college-bound, which is rare. Taylor is slated to be the future dental hygienist. One of Taylor's friends becomes the girl that gets pregnant in high school and gets married before she can think of leaving. She has another friend who knows if she wants to get out, she'll just have to run. There's the golden boy who's loved by every girl, and the boy who gets whatever he wants. There's a real web that connects all the popular kids in the social circle, and the more the book progresses, the more they realize how many threads there really are.
A major high point for me was Taylor's relationship with her mom, Sandra. Sandra isn't a great mom. She has her moments, but she's also always tried to pull off her parenting in an older sister style. Taylor has a bit of resentment on that front, but I liked how Sproul balanced the relationship. It's not conventional, but there are smaller glimmering moments where Sandra really shows how much she cares, even if she doesn't articulate it well in hugs or motherly words.

Plot: 4 This is basically a slice of life book. There's a lot of up and a lot of down throughout the year. The central storyline follows Taylor battling her feelings about her sexuality. While she starts feeling like she has to keep it a huge secret, she slowly warms up to the idea that she could share it with the world and talk about her feelings. Her confidence grows as her rebellious streak gets louder. A lot of the storyline is really great, and Taylor comes a long way, but I wish it had been more fully explored in the resolution. I liked the final pairing, but it really came out of left field for me, and I would've liked to dwell on that evolution for a little longer. Also, a lot of her major strides seem like they come out of nowhere. Taylor does strike me as impulsive, so I get that in some of the instances, but I wish we'd seen a little more development in a couple places. We didn't get to see much of her thought process between trying to date the school's golden boy to loudly announcing to the world that she was a lesbian. Even in an impulsive moment, I would've loved to hear more about what finally inspired it and the emotions behind it.
Taylor's other big goal is to get out of town. Her idea for that is her suspicion that movie star Johnny Moon is her father and that he'll fly her out to LA and let her stay. This subplot sounds a lot like a fantasy until a letter randomly shows up and then there are publicist calls and her life is being decided for her all over again. Like the other subplot, I wished that her escape plan and her relationship with her father had been explored a minute longer. There was plenty of space in the page count to fit that in.

Writing: 4 This book tells you what's up from page one. I like how immediately the voice shows up and almost slaps you in the face. It's bold. I think it opens with a discussion of how Taylor has herpes. Funnily enough, herpes is kinda a motif for the book that actually winds up being really cool and literary in the moments it comes up in character discussions. There are a lot of literary devices in this book that you can trace. They're super effective. It'd be interesting to see an English teacher's dissection of it. I think the technique helps up the nostalgia factor.
This book takes place three years before I was even born. It's a weird time to read about because there's a lot of the world I could easily relate to: playing with American Girl Dolls, a lot of the food, a lot of the music references. And then there are the parts that feel utterly foreign. Being able to just eat lunch at the airport, not having cellphones to connect, the idea that Taylor wearing a suit would be a huge deal, and just how much more intense the homophobia was back then. I read a lot of LGBTQIA centered books. They're honestly most of what I read, but I've never read one set in the past. While there are moments of homophobia, fears, insecurities, fear of harassment, and fear of not being accepted by friends and family in the books set today, it's just amazing how entirely the whole attitude around it was different in the majority of the population. In this story, the people who weren't totally homophobic showed it by ignoring her sexuality or reminding her not to talk about it widely. It was weird, but it's also made a lot make sense. You can see the residue of that mindset in some adults still, and I didn't get how they formed their viewpoints till now. It really was an entirely different world.
I always find near past books fascinating because they're glimpses into a world I just barely missed. I enjoyed getting to look back and learn.

Also, the moment I started reading the book, it made me think of Kelsea Ballerini's song "homecoming queen?"

*This book was sent to me by the author. This does not effect my opinions. Thoughts are all my own.*


More Like This...
The Seven Torments of Amy and Craig

Links of Interest:
Conan Gray's Kid Krow Meets YA
Breath Like Water
End of the Driveway- Original Story
Most Likely