I Was Born For This by Alice Oseman: YA Book Review 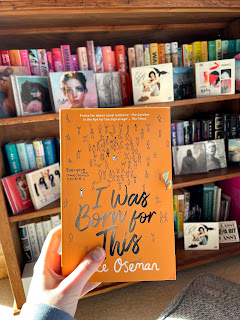 I Was Born For This by Alice Oseman

Overview: Ever wonder what it would be like to meet your favorite member of your favorite band while he's having a massive anxiety attack in a bathroom? Angel knows exactly what that niche experience is like. Angel's whole life has been leading up to this point because by the time she met Jimmy in the bathroom, she already knew everything about him (or so she thought) from running her stan account @jimmysangel). His band, The Ark, is her whole life. Before she gets to Jimmy, though, she meets her internet friend, Juliet, in real life for the first time and has to figure out how much of her IRL life to shove aside for a band and a fandom. Overall: 3.5

Characters: 4 This book is a 2 POV story alternating between Angel and Jimmy's POVs. Angel is the ultimate fangirl. She runs stan accounts on multiple platforms and is always up on what the boys are doing. Angel is very connected to her religion and devotedly does morning and evening prayers, and she mentions that she sees The Ark almost as an accessible God. The fan created ship between Jimmy and Rowan is the only thing that makes her believe love is real. Even though her life sucks and is painfully average, The Ark makes her special, loved, and important. No, she doesn't want to date any of them, and she doesn't follow them because they're hot. She has a genuine love for them like they're her brothers or best friends. Angel is one of the better developed characters, and I think she portrayed what your average invested fan is like well. I think Oseman did a great job humanizing what so many people see are a horde of screaming girls (probably because of her turn of fandom herself).

Jimmy is our other POV character and gives us the inside view of the band to counteract Angel's perception and what she reads online. Jimmy is trans and had to navigate being public about that after he was outed a year or so ago. Jimmy is mostly defined by his anxiety disorder and paranoia. He misses his grandfather and his old life. He deeply struggles with how many changes he's endured in his life. He resents not being able to go on a normal walk or go anywhere without being recognized. While music has always been his main love, Jimmy is even losing passion of that because of the scale they're gotten to.

As far as minor characters, there's Juliet, Angel's longtime internet friend she meets in person for the Ark concert. We barely get to see Juliet at all, which is unfortunate, because the glimmers she shows are so promising. Instead, we hear more about Mac, Juliet's other internet friend who shows up as a prize to Angel. When she should be getting to know Juliet, Angel is intent on exposing Mac as a fake fan.

The last three main-minor characters are the rest of the band world. Rowan is the oldest band member and a leader in a sense. He's closest with Jimmy and is the most responsible. He's dating Bliss, his secret, free spirited girlfriend. Bliss is by far the most interesting character in the book, and she's used to blend worlds between fans and the band when she meets Angel while staking out a fan meet up. Finally, there's Lister, the front man of the band in the sense that he's on all the Sexiest Man Alive lists. Everyone loves Lister, but he deals with a serious drinking issue that gets more and more out of hand as the book progresses. Lister is also bi and navigates that throughout the book. Unfortunately, his sexuality and his alcoholism aren't treated the most respectfully or realistically in my opinion. It seemed played up for dramatic plot points for no reason.

I do want to note that the book is super diverse, which is great, but I don't believe any of the rep is own voices. Angel is Muslim, and I don't believe her background is specified further. And Jimmy is trans. The rep of these characters felt respectful and authentic to me, but I can't honestly attest to the accuracy since I don't share those identities either. I really only had major issues with Lister's representation, as I just mentioned, but it is something to be aware of.

Plot: 3 There were some parts of the book that I loved and parts that seemed so overblown and unrealistic, it was hard to sink into, even as an indulgent, fun read. Some moments were quite nuanced and beautiful and others felt overly dramatic and flimsy. Overall, I think the book is a fun whirlwind imagine of falling into your favorite boy band, but it was hard to keep invested at times. My favorite part of the plot was the arc of Angel learning to love herself. She has a moment of realization where she comes to the point that she puts all of her love and faith in the Ark because she doesn't know how to love herself, and she needs to be able to reprioritize how much love and times she gives to them vs herself. She can't simply rely on them forever. As sad as it is that she starts to detach from the band by the end of the book, I think it shows an arc many fangirls take. Investing so passionately in someone else can be a necessary escape. I latch onto artists when I'm going through the worst points in my life as escapism. I'm always more invested when I want to avoid my own life. And part of that life cycle, of an artist helping you through something, is they get you to a point where you can stand on your own again. It's one of the most beautiful parts of fandom to me, and I love that the book emphasizes that.

Writing: 3 I'm a huge fan of Alice's books. Despite the premise being perfect for me, I think this is my least favorite of her books. I think she did an amazing job portraying fandom, but she struggled with truly getting inside the band's head. That makes total sense considering she has experience being a fan but not being in a boy band. Also, similarly to the critique I gave Admission, ripping off so many details from real life cheapens the experience. It was painful at times how much she stole from One Direction to formulate The Ark. I spent half the book matching traits between Ark boys and One Direction boys. The parallels extended so far as to have an apparent nod to Larry (people who seriously shipped Louis and Harry) with the Rowan x Jimmy ship. I did think it was interesting the way she showed how it messed up band dynamics and their personal lives. Oseman makes a good point of the deep level of privacy invasion that happens with celebrities. But the parallels were just too similar. Rowan's girlfriend, Bliss, gets exposed and she gets a ridiculous amount of hate online. If you follow the One Direction fandom, all of these moments have direct parallels to Louis's girlfriend, Eleanor. I just wish the details had been more original so I could sink into the story instead of thinking about how I was reading really meta One Direction fic in a way.