Time of Our Lives Review 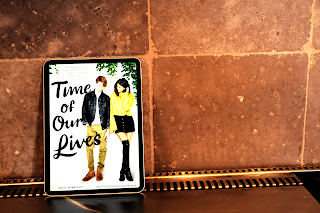 Time of Our Lives by Emily Wibberley & Austin Siegemund-Broka
Overview: Juniper is ready to leave her giant, tight-knit family to find herself at the college of her dreams. As the oldest of many siblings, she's always been the glue, but she's excited to finally be free of her expectations. Going on a college tour up and down the East Coast with her boyfriend, Matt, feels like the first step.
Fitz, on the other hand, has already decided he's going to stay in his hometown for college so he can care for his mom who is facing early onset Alzheimers. He feels a responsibility to stay behind and care for her even though his mom is pushing him to explore schools in other states and his brother seems more checked out from the family than ever. But, to please her, Fitz and his brother, Lewis, are on the same path at Juniper and Fitz.
While Juniper is determined to soak in every moment, Fitz wants to block out the reminders of the world he's not allowing himself to have. Meeting each other changes both of their prospective on life, college, and what it means to plan for the future. Overall: 4

Characters: 3 I had a weird experience with this book. I really did not like either POV character. There were times when they seriously got on my nerves, but I enjoyed the secondary characters a lot. Their development was what kept me going.
Juniper and Fitz both share the problem of being super flat. They aren't really developed beyond their respective problems and their singular "quirks" that are supposed to make them special. Fitz is defined by one of my biggest pet peeves with authors trying to show a character is smart. He uses obnoxiously large words for no reason and reads a dictionary all the time. It just came across as pretentious and like he was trying way too hard. I get that knowing words could be a hobby, but it was his entire personality and moments of it were stuck in at the most awkward times. I needed something more there. The other half of Fitz is occupied by worry for his mom and her early onset Alzheimers. This is a valid concern, and I genuinely felt for the pain and anguish it must have caused him, but he was so emotionally walled off, we didn't get to see how it effected him. Throughout the book he'd stubbornly made up his mind about his duty, and even as Juniper got him to push his boundaries, he just flipped his thinking to wanting to go to college far away. I get the element of not wanting to let yourself consider what could happen, but none of his emotional journey is ever shown. He just tells us he feels one way and then another way. It left him as an unsatisfying character to follow.
Juniper was better. I sympathized with her frustration with being an extra parent to her younger siblings. Her struggle and complex feeling about her family were actually very well portrayed. It was one of the highlights of the book. Juniper as a person beyond that, though, wasn't. Her thing is that she has an insanely perfect memory which, again, just sat awkwardly into her character. It didn't matter to anything super important to the plot or serve a purpose. She also wants to be an architect. I wish her passions had been shown to the reader more instead of being told about it and having it noted on architectural tours they go on. I wish I'd gotten to know more about who Juniper was on a deeper level.
Then there's the idea of Fitz and Juniper as a couple. I couldn't find the chemistry between these two anywhere. Juniper starts the book with her boyfriend, Matt, who is super sweet. He's just a little lost with what he wants to do with his life, and he isn't desperate for change like Juniper is. She knows all this going into the trip, and you never get a reason to dislike Matt, so it's hard to be excited when she starts up with Fitz while she's with Matt. I felt for how confused Matt was and how hard it can be to have the constant expectation on you. Also, there aren't enough sweet boyfriends in books. I wanted to see more of him. And I didn't see why Fitz was an improvement. Juniper and Fitz have tons of awkward conversations and even admit that they shouldn't work together. Just like with their characters, there's a real lack of emotional depth in their relationship to cling to or be excited for them, as much as I wanted to.
The one character I majorly enjoyed was Lewis, Fitz's brother. As much as Fitz thinks he's a loser, Lewis really is caring and thoughtful. He strives to strike a balance between his personal life and family responsibilities even though it's super complex and difficult. He also really tries to put his best face forward to protect those around him, even if it makes him seem unaffected. He's navigating the hard reality of the adult world and having to make choices between his relationship with his girlfriend, Prisha, and his accountability to his family. He's full of flaws and complexities that made his character really pop. I almost wish I could read a book about Lewis's time at Boston University.

Plot: 5 I wish I'd loved Juniper and Fitz because I'm in love with this premise. For staters, I'm really happy to see preparing for college in both the practical and emotional aspects at the forefront of the book. This book tried to capture all the different fears and anxieties you go through right as your life is on the cusp of change, and I would really love to see more of that across the category. Also, it has the perfect premise. One of my favorite trope type things is romantic relationships that are doomed or have a deadline. Fleetingly meeting on a string of college tours fulfills that along with future anxiety and road trip fun. The plot really offered up everything I want in a story. Like I noted above, the delivery on the romantic side and the full extent of the arch was a bit of a letdown, but for once, a plot compelled me to keep reading.

Writing: 3 The concept had me so excited. I wish that the characters and the depth could've come through. Oddly, I had a super easy time getting into the beginning of the book, but as the romantic stakes increased, I started to lose interest. Again, it goes back to just not seeing the chemistry. I thought about DNFing at 80%, but I'd come too far to quit.
I think the biggest problem is that the pacing broke the whole story. While I was reading, it didn't bug me, but looking back, that seems to have been the whole catalyst for the issue. We spent a ton of time touring different schools and getting their vibe and exploring Juniper and Fitz's family complexities. Those were the places the story really sparkled. In the moments that would develop them as individuals or a couple, the story always flinched away, rushing conversations and ending important moments in the blink of an eye. I felt like I never knew Juniper or Fitz and that they didn't get to know each other.


Other Books By These Authors...
If I'm Being Honest Review
Always Never Yours Review

Links of Interest:
Learning To Use Your Digital Library System
What I Like About You Review
Harry Style's Fine Line Meets YA
Unscripted Review